Years ago, I sometimes read the usenet group rec.sport.baseball. Many of the posters on that board used a word that I hadn't seen before, but it was one I soon embraced: "mediocy." According to baseballthinkfactory.org, the word was coined "by Dave Kirsch and defined by David M. Tate":

It is a portmanteau word, combining 'media' and 'idiot' to denote a member of the print or broadcast media who hasn't a clue. 'Mediocy' is derived by analogy with 'idiocy'.

Today, while watching a report on rising gasoline prices on MSNBC, this term immediately came to mind.

The reporter declared that crude oil and gasoline prices were at new highs, noted that even in the early 1970s gas prices had not exceeded $2 per gallon, and declared the entire situation "scary."

Given these facts, why am I using this as an example of "mediocy"?

Well, take a look at this chart.

Or, look at the one from the Department of Energy: 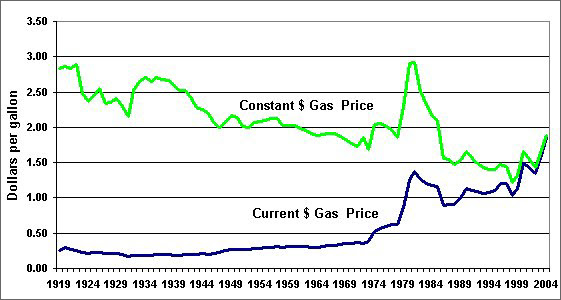 In constant dollars (i.e., adjusted for inflation), current gas prices do not yet approach the peak price attained around 1980. As I tell my students, a barrel of oil cost about $2.50 at the beginning of the 1970s and ended the decade at around $40. Soon after, there was a glut of oil on the market and prices collapsed.

Every now and then, someone gets it right. Here's Kris Axtman reporting in the Christian Science Monitor from April 19, 2005:

The fact is, oil is still relatively inexpensive. By one measure tracked by Dow Jones, we are still far from matching an April 1980 spike in US oil prices. The $39.50 per barrel price that month exceeds $90 in today's dollars.

In 1980, gas prices were $2.87 per gallon, in constant dollars. We're almost there, but consider this, also from Axtman:

Even with the rising costs, economists say, energy still makes up a small percentage of a family's budget, about 4 percent. That's half what it was in the early 1980s.

If current high prices prove anything, it is that Americans became addicted to cheap fuel in the 1990s, bought gas-guzzling SUVs and essentially forgot about conservation.

Oil prices will soar, one day, with scarcity limiting supply under conditions of high demand. We're not quite there yet, but the situation demands level-headed policy planning, not media scare stories.
Posted by Rodger A. Payne at Saturday, August 13, 2005