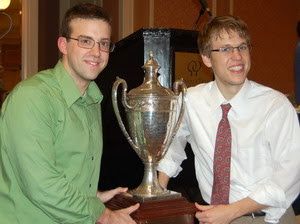 The University of Kansas debate team of Brett Bricker and Nate Johnson has won the 2009 National Debate Tournament in Austin, Texas. They defeated defending champ Wake Forest in the final round on a 4-1 decision.

Congratulations to Brett and Nate (nice guys who I met at the last KU debate reunion), to Coach Scott Harris, and to everyone associated with the program. Debate is truly a team activity and winning NDT takes a great deal of hard work.

This is just terrific news.