From Hollywood: The antigenocide paparazzi 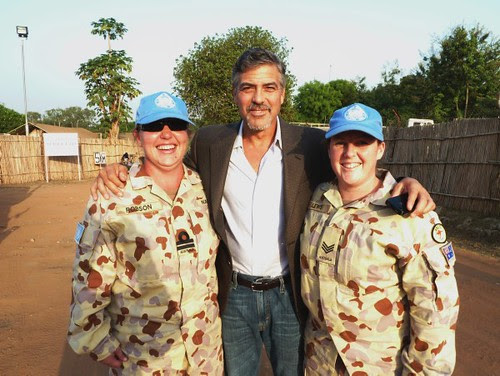 Thanks to a busy summer travel schedule, I neglected to mention in mid-July new photographic data about ongoing violence in Sudan, acquired and released by partners affiliated with actor George Clooney's Satellite Sentinel Project.

The Harvard Humanitarian Initiative collects and analyzes images from commercial satellites, feeding them through a web platform designed by Google and the open-source software firm Trellon and comparing them with on-the-ground reports from The Enough Project, a human rights group. The group's work is especially vital in places like South Kordofan, where neither the U.N., outside aid groups nor journalists are allowed....

Yesterday, the group published a report on its latest images. As evidence of mass graves, the Satellite Sentinel Project points to the three freshly excavated areas pictured in the lead image above and to the white objects below, which it suspects are white plastic tarp body bags. A witness tells the organization that he saw 100 bodies or more put into one of the pits.

Based on these images and eyewitness reports, the organization concludes that the Sudanese military and pro-Khartoum militias "have apparently engaged in a campaign of systematic mass killing of civilians in Kadugli." 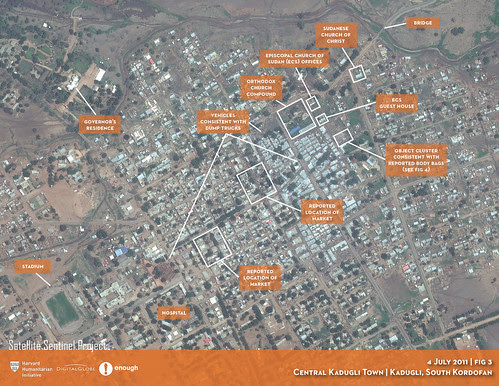 Earlier this year, in news reports about the project, the Hollywood icon emphasized the potential deterrent effect of transparency:

"We are the antigenocide paparazzi," Clooney tells TIME. "We want them to enjoy the level of celebrity attention that I usually get. If you know your actions are going to be covered, you tend to behave much differently than when you operate in a vacuum."

If the group's July report is accurate, then Sudanese leaders have obviously not yet been deterred by the eyes in the skies.

However, anyone who has seen "Hotel Rwanda" understands the implicit threat Clooney is directing at human rights abusers. In a scene roughly two-thirds of the way into the film, the Paul Rusesabagina character played by Don Cheadle (involved with Clooney in the Satellite Sentinel Project) attempts to influence corrupt Rwandan General Bizimungu:

Your white friends have abandoned you,
Paul.

GENERAL BIZIMUNGU
(laughs) The United Nations. Madmen are
on the streets, Paul. But I will take
care of you. (chugs his drink) Your
cellar is well-stocked, right?

PAUL
Yes, General. I am glad you came by. I
overheard something that I think you
should know about.

GENERAL BIZIMUNGU
What did you overhear?

PAUL
A discussion between an American Embassy
official and a UN Colonel.

GENERAL BIZIMUNGU
What did they say?

PAUL
The American assured the colonel that
they would watch everything.

GENERAL BIZIMUNGU
Watch everything? How? They are gone.

Paul points surreptitiously to the sky. The General looks up.

PAUL
Yes, they can photograph the epaulets on
your shoulder.

GENERAL BIZIMUNGU
And what will they do with these
satellites?

PAUL
The American said intervention is too
costly, better to get photographic
evidence and snatch up the high command.

PAUL
'Snatch them up and put on a war crimes
trial. Lock them all away forever. No
political risk, and big publicity.'
That's what he said. (a beat) I thought
I'd better tell you.

The General looks again to the sky then.

Given what Duck of Minerva co-blogger Alana Tiemessen has recently noted about the international reaction to events in Syria (likely tied to ongoing intervention in Libya), Clooney's data might not yield any tangible action.

Note: My film class typically views "Hotel Rwanda" near the end of the term.