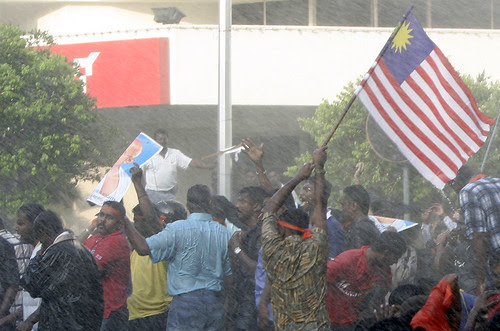 Thanks to my sabbatical, I had time this week to attend an interesting panel of a relatively small workshop sponsored locally by the Center for Asian Democracy: "The Jasmine Revolution and the 'Bamboo' Firewall: The impact of the Internet and new social media on political change in East Asia." My colleague Jason Abbott (CAD Director) explains a bit more about it on his blog -- and promises a more complete recap next week.

The panel I attended featured three interesting papers on "The New Media in Southeast Asia: Spotlight on Malaysia."

As a student of international relations, it was somewhat unusual for me to attend a panel clearly constituted by comparativists talking almost exclusively about domestic economic, political and social variables. Indeed, during the Q&A, a fellow workshop participant asked the question that was most on my mind -- how did the Malaysian events the speakers described during their talks tie into the Jasmine Revolt?

One respondent pointed out the different ethnic mix in Malaysia and agreed with an audience member that only Bahrain is somewhat similar in the Middle East context.

I would have liked a lot more followup, to explore potential international and/or transnational dimensions. Did local activists learn from protesters in North Africa and the Middle East? Were new communications media employed globally, or were they primarily used on a local level, as emphasized in the talks? Were there any contagion effects of the other rebellions? Are states of East Asia (this panel focused on Malaysia) feeling any international pressure from bigger powers, international institutions, or transnational NGOs to embrace democratic norms?

Unfortunately, this particular panel did not really address those sorts of questions and I did not have time to attend the Roundtable scheduled to follow this session.

In short, the presentations were good, but not sufficiently IR for my tastes.