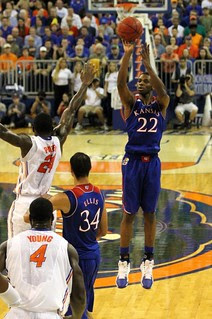 Does everyone remember an old joke about Michael Jordan from the 1980s? I first heard it while living in Chicago, but I'm sure it must originate from his North Carolina days:


Question: Who's the one man that can hold Jordan under 20 points per game?


Question: Who's the one man on the court who can hold Wiggins under 20 points per game?

Embiid, Kansas's star 7' center has missed four games this season thanks to back injuries. In those games, teammate Wiggins has scored almost 100 points, averaging 24.3 per game. In the last two Kansas games, Wiggins has scored over 70 points and hit 21 of 35 shots. He's also averaged 8 rebounds in both games, plus had 5 total blocks to go with 8 steals. He's been a genuine athletic force and has dominated both games for long stretches of time. 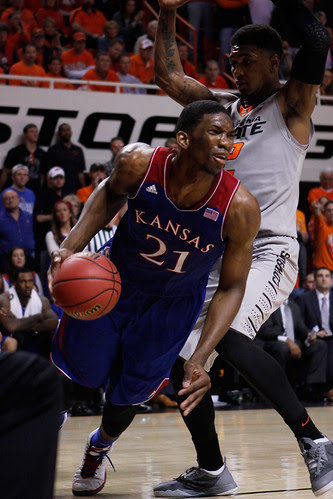 Wiggins's seasonal scoring average is now up to 17.3 points.

Embiid has a stress fracture in his back and may not play again this season; thus, the apparent leap forward by Wiggins is a hopeful development for Kansas.

Wiggins has occasionally looked like the best player on the basketball court in Kansas games this year, but that has been much easier to see this week with Embiid sitting on the bench. Losing the star center doesn't make Kansas a better overall team, but it has highlighted the talent of his more highly recruited teammate.

I'm not saying that Wiggins is ready for the NBA. Frankly, I don't really care except that his presence in Lawrence and on the court would almost surely make Kansas a stronger team next season. I do recall that long-time NBA all-star Paul Pierce was a much better all-around Jayhawk player by his sophomore and junior seasons than he was during his less steady freshman year. I think he's the most comparable Jayhawk to Wiggins in my memory. He is also reminiscent of Ben McLemore, of course, but I thought the talented McLemore left with some holes in his game that another year at Kansas would have helped fix.


** Yes, I know Jordan tallied 20 points per game in his sophomore season at UNC.