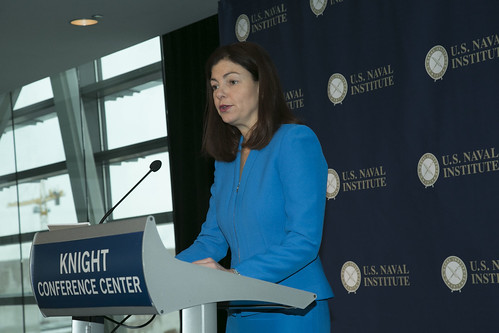 Basically, Ayotte argued that the Obama's administration's "reset" policy toward Russia has been too conciliatory. Indeed, she said that this policy has failed and caused Vladimir Putin to take advantage of American weakness -- primarily in Ukraine. She emphasized these points as evidence of Barack Obama's weakness:


• "His decision in 2009 not to place NATO missile defense systems in Poland and the Czech Republic.

• Obama’s choice in 2010 to “brush aside” the Russian invasion of Georgia, which happened during the George W. Bush administration, by pushing through a trade agreement with Russia.

• And Obama overlooking violations of one nuclear arms agreement at the same time the two countries were negotiating a new Strategic Arms Reduction Treaty."

She noted that despite American overtures to Russia, it has not been helpful in regard to the "humanitarian tragedy" in Syria or Iran's nuclear and missile programs. Plus, Russia has "a horrible record" on human rights.

In the question and answer session, Ayotte agreed with an audience member who claimed that the $17 trillion dollar national debt is America's number one concern. Indeed, Ayotte referenced Joint Chiefs Chair Admiral Mullen who said that the "biggest threat to our national security is our debt." Notably, the Senator's website has a debt meter on the front page.

Ayotte praised Ronald Reagan throughout her speech, but she definitely didn't emphasize either of the Bush presidencies.

Indeed, the partisan nature of the speech was as much about what Ayotte did not say as what she did say. Her attacks were pointed at the Obama administration, but she very carefully overlooked some pertinent details:


1. While Russia's attacks on Ukraine are a clear violation of international norms protecting state sovereignty, she did not mention the difficult rhetorical position the U.S. faces because of the Bush administration's adventure in Iraq. This has long been a problem, as I noted in 2008 in regard to Georgia.

2. Ayotte made passing reference to Georgia, but did not explain whether this Bush-era conflict should be tied to her overall argument about Russian adventurism, which she linked to American weakness. Was America weakened by more than a decade of fighting insurgents and terrorists in Iraq and Afghanistan? She didn't say.

4.  About those missile defenses and the alleged INF arms control violation, Ayotte didn't mention that the Bush administration unilaterally killed the anti-ballistic missile defense treaty with Russia in 2002. Would anyone want Russia to do that with the INF or START treaties? No. All signs suggest both the US and Russia are implementing the new START accord. The INF allegation is new and the Obama team is attempting to sort out the details via diplomacy -- much like the Reagan administration did with an alleged violation of the ABM treaty in the 1980s.

By the way, Western European states favored the decision to scrap the missile defense system she mentions, primarily because the U.S. is aiming to deploy instead an alternative technology that many defense experts believe will be superior technology (Aegis on land).

5. Ayotte also didn't mention Russia's help in getting Syria to agree to eliminate its chemical arsenal. Or the role it plays in trying to prevent Iran nuclear weapons. Russia doesn't want a nuclear-armed Iran.

Finally, Ayotte's policy suggestions didn't really offer new ideas to the debate -- or even ideas that are significantly different from the status quo. Today was all about carping about alleged weakness, not suggesting actual policy that would provide new leverage over Russia:


In response to Russia’s actions in Ukraine, Ayotte stopped short of calling for military intervention, but she urged Obama to order a series of economic and diplomatic sanctions sanctions on Russia.

Ayotte called for the U.S. and the world community to “alienate” Putin, to increase natural gas production in an effort to cut off Russia economically and to “revisit” the decision not to put missile defense systems in Poland and the Czech Republic.

The G-8, a group of the top industrialized nations, also may expel Russia in response to its invasion of Ukraine.

Ayotte did call for more American military assistance to Ukraine, so that the country could defend itself -- and opposed the proposed defense cuts that are under discussion in Washington as part of planned deficit reduction.

The Senator openly agreed with many policies already taken -- she would not take military action, approves of some US signals with its military, etc. Indeed, the links I included above in her proposals point to policies the U.S. is already taking or considering.

Really, the conclusion was very bland given the "peace through strength" vision of Reagan she offered throughout the speech. It was as if an '80s defense hawk had ended a talk on the "window of vulnerability" by emphasizing that the U.S. should build bomber aircraft and nuclear submarines to supplement its arsenal....Oh wait, we already had those, so land-based missile vulnerability probably wouldn't cause world war III. .