As I did for September and October, I'm blogging about my activities in Ottawa tied to my Fulbright research chair. Again, this serves as preparatory work for my final report to the funding agency.

Though I'm not going to detail every meeting, I talked to multiple local academics and regularly attended a security-related brownbag on the Carleton campus. A couple of those meetings with faculty will apparently lead to a future research project and I'll mention it eventually when I have more concrete details. It will tie together some of my past work on narratives and the Iraq war.

I will note a lunch with Dr. Gerry Schmitz, a former policy analyst with the Parliamentary Information and Research Service from 1981-2011. I previously blogged about a couple of important upcoming events on US-Canada relations that Gerry is helping to organize that will include my participation. Gerry is also a professional film critic and has a new book that compiles many of his reviews.  Film is a major common interest, of course.

On November 9, I attended a presentation by one of the deans of Canadian IR, Kim Richard Nossal, "I Mean, What's an Ally? The Trump Cession and Canadian Foreign Policy." Nossal outlined many of the horrible things Trump has said about Canada and Canadians--and discussed the potential implications for US-Canadian relations.

On November 14, I attended a panel at University of Ottawa on "What do the U.S. midterms mean for Trump (and Canada)?" NPSIA colleague Meredith Lilly focused on US-Canada trade issues, which was helpful for my research, and veteran international affairs analyst Michael Kergin offered some interesting relevant ideas as well.

Early in the month, I was interviewed by two Carleton Journalism students who wanted to talk about the upcoming US midterm elections. I correctly forecast that the Dems would win 35 or more new seats and that the Republicans would hold the Senate.

For leisure, early in the month, my spouse and I took our dog to visit the falls on the Rideau river, which is near the French Embassy east of downtown Ottawa. 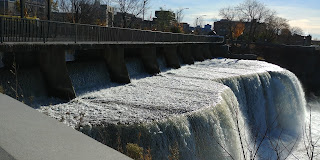 On November 11 Remembrance Day, we visited the Canadian War Museum. It was too large to go through all the exhibits on one day, so we focused on the World War I exhibitions, including the special one to commemorate the 100 year anniversary of the armistice, though I also went through the section on post World War II-Canadian policy. 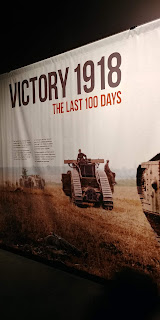 On November 30, we visited the Diefenbunker Museum in Carp, which is located in the former bunker that was going to host top Canadian government officials during the Cold War in the event of a nuclear attack. There were rooms filled with old computers, communication equipment, and high-level meeting spaces. The Prime Minister's bedroom looked like a 1960s vintage college dorm room -- or summer camp room. 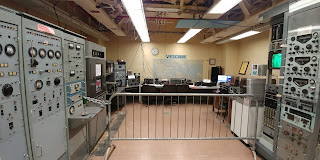 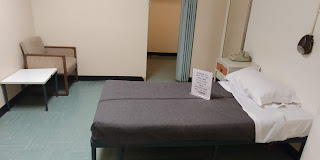 My daughters visited Ottawa for  American Thanksgiving. It was brutally cold, but we did visit the National Gallery (and IKEA). 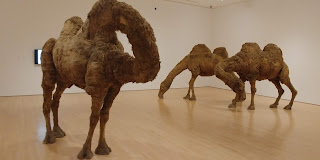 I also played in a faculty poker game and won a few Canadian dollars.