A few weeks ago, I posted about what I did in September during my Fulbright stint in Ottawa, Ontario. This post will summarize my October.

On the 2nd, I attended a Workshop at Carleton on North America 2.0. A group of scholars have been meeting to write an update of Bob Pastor's 2012 book on The North American Idea: A Vision of a Continental Future. I attended a couple of panels and learned a good deal about current and potential ties linking the US, Canada, and Mexico. Coincidentally, Pastor's book was one of the few books I brought to Canada, so I read it in preparation for the meeting.

Based on my "America First" chapter in the forthcoming Canada-US Relations book (in the series on Canada Among Nations), I gave a presentation in David Carment's Canadian Foreign Policy class. Incidentally, I have submitted revised page proofs already and the book is slated to be published on February 14, 2019. On October 15, I attended a presentation about the new USMCA by Chris Sands, who with Carment edited that book.


On October 26, I attended a very interesting panel at Carleton on "Small Wars, Big Data."  It was part of the Conference of Defence Associations meeting, held on campus during Carleton's week of fall break. On the 31st, I attended a presentation on "The War on Terror Gone Wrong" at University of Ottawa by former Canadian diplomat Daniel Livermore.

For my research project on US-Canadian relations, I met fairly regularly with some local academics, read various public speeches by middle power Foreign Ministers, and tried to gain a better understanding of Canadian perspectives. I learned interesting lessons about the domestic appeal of modest anti-Americanism, the great dependence of Canada on trade with US, and the intense interest in the American midterm elections. I voted in Kentucky by dropping my absentee ballot at the American embassy. 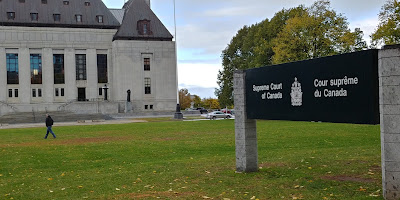 During part of October, I also worked on a revision and resubmitted for journal publication my manuscript “Grappling with Dr. Strangelove’s Wargasm Fantasy,” based on a paper I delivered at the 2016 ISSS/ISAC conference at Notre Dame. Earlier this week, I learned that the paper will be appearing as a journal article in International Studies Review.

During the fall weather, my spouse and I walked all over downtown Ottawa (often with our dog Paddy) -- visiting Parliament Hill, the Byward Market, Lansdowne (for the Farmer's Market), the Rideau Canal, etc. We also drove over the Ottawa River to Quebec on Canadian Thanksgiving and hiked in the beautiful Gatineau Park. 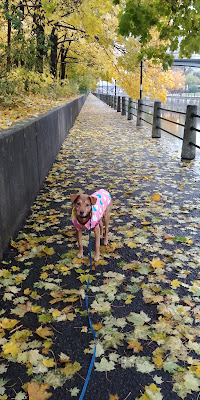 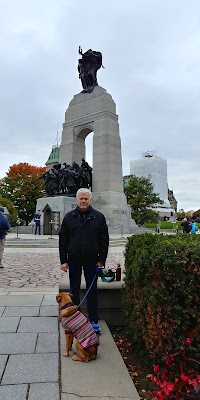