Last weekend I traveled back to Lawrence for a University of Kansas debate team reunion. I still have not flown since 2019, so this trip involved a roundtrip drive to St. Louis, an Amtrak across Missouri Friday and Sunday, and then short car trips to/from KU.
The Friday night registration and banner hanging was on the top floor of a warm academic building. I wandered down to the trophy case on a (much cooler temperature) lower floor and snapped a shot of the national championship trophies on display. 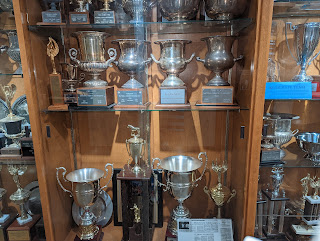 I found the trophy I helped win in 1983 as well as the others depicted on these bright banners. This is only a taste of all the banners as there are also markers for Final Four teams, top individual speakers, winners of other national tournaments, etc. 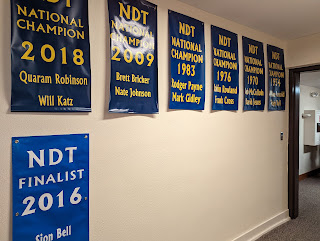 On an sour note, I felt the registration area was overpacked with people. Since I had the sniffles by Sunday, mild fever and body aches by Monday, and a positive COVID test by Tuesday, then I guess my concerns were warranted. Hopefully I was not a superspreader. I masked in some circumstances, but most people were unmasked throughout the weekend. I've only heard of one other person testing positive, but who knows given the state of contact tracing in America? I think my case could have been transmitted from poor ventilation in a hotel. One of my neighbors Friday night was coughing loudly all night.
The next event was a buffet-style dinner at a local catering venue with plenty of beer and food for everyone. There were some games, but the older alums that I hung out with on the balcony mostly sat around and talked. Lots of fun reminiscing. 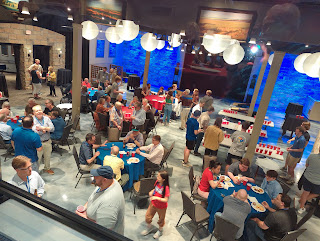 On Saturday morning the debate alumni toured Allen Fieldhouse, home of the Kansas Jayhawks reigning national champion basketball team. They have nearly as many recent victory banners and trophies as debate does: 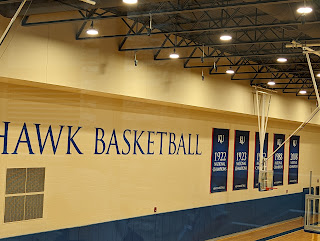 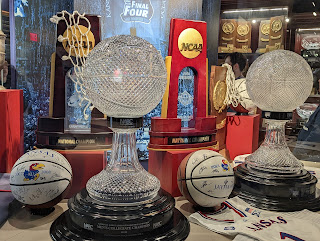 There was an event remembering some of the KU debaters who have died in recent years (including Frank Cross) and then a cocktail hour and meal at the Eldridge Hotel in downtown Lawrence. I was in a wedding there in May 1983 and may not have been back in all that time. Before dinner, I managed to help organize this photo that includes 5 debaters from the 1976, 1983, 2009, and 2018 champions, plus the two head coaches.
Left to right: Former Coach Donn Parson, Brett Bricker (2009), Robin Rowland (1976), Mark Gidley (1983), Quaram Robinson (2018), coach Scott Harris, and me (1983). 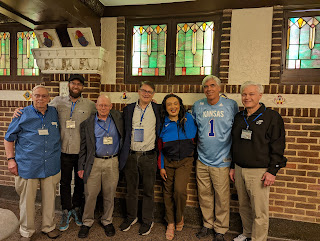 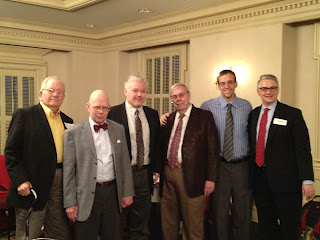