While the Bush White House is trying to focus attention on the alleged inexperience of Senator John Edwards, the FBI is reminding everyone of the President's own past.

Former Enron Corp. chief executive Kenneth L. Lay was charged with 11 counts of securities fraud, wire fraud, and false and misleading statements in a 65 page indictment unsealed this morning hours after he surrendered to federal authorities.

Lay is claiming that he was misled about Enron's circumstances by financial officers, but the Post notes that this defense is unlikely to fly:

In recent months, the grand jury has heard evidence from a series of former employees who said they alerted Lay to mounting financial problems in the months before the company disclosed phony earnings and billions in hidden debt.

And Lay was selling millions of dollars worth of company stock even as he was receiving all this bad news. So far, nearly a dozen former Enron executives have either plead guilty or been convicted of various felonies. 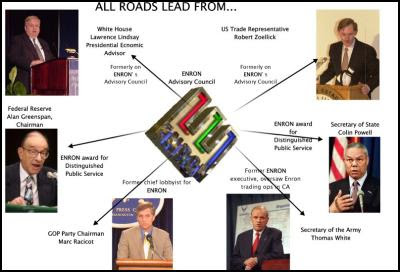 But, of course, there's much more. A lot more.

First, Lay personally served as co-chair of George H.W. Bush's 1992 re-election campaign. Also, Enron was the #1 contributor to the 2000 Bush-Cheney campaign (worth $1.14 million). As Post reporter Carrie Johnson wrote, Lay "cultivated close ties to the Bush administration. President Bush nicknamed him 'Kenny Boy.'" Do a little searching of the internet and it is easy to find copies of personal correspondence between Lay and the President. For example, then-Governor Bush called Lay an old friend in 1997 when sending him a personal birthday greeting.

Columnist Kevin Phillips claims that the Bush family has received upwards of $8 to 10 million dollars from Enron over a 17 year period. "Depending on some still-unclear relationships, it could be as high as $25 million."

Finally, Lay was one of the oil industry insiders Dick Cheney met with when the Vice President was secretly planning the Bush administration's energy policy in 2001.

And of course, Enron's crimes are legion. They defrauded investors, robbed their own employees by making them sink retirement dollars into the company, and apparently conspired to screw California consumers. This latter act indirectly toppled Governor Gray Davis, meaning that the company distorted democracy. Abroad, they also had a dubious human rights record.

Bush and Lay are part of the same culture of crony capitalism that must be held accountable for their misdeeds. These are the very guys who have engineered the "two America's" that John Edwards keeps talking about.

Speaking of Bush's past and John Edwards, Brad DeLong would like to remind the country of a good reason to ignore those Republican ads claiming that Edwards was John Kerry's second choice for Veep. After all,