On September 15, 2002, when it was becoming increasingly probable that the US was gearing up to "liberate" Iraq, The Washington Post ran a front page story about the future of that state's oil. Reporters Dan Morgan and David B. Ottaway noted that Iraq had the world's second largest supply of proven oil reserves (112 billion barrels), which meant that toppling Saddam Hussein

"could open a bonanza for American oil companies long banished from Iraq, scuttling oil deals between Baghdad and Russia, France and other countries, and reshuffling world petroleum markets."

Well, Chalabi is now officially the Iraqi oil "big shot." This week, he took over as the Iraqi Oil Minister. Chalabi was already head of Iraqi's energy council, even though he suffered a humiliating defeat in the December elections (his party received 0.36 percent of the vote). 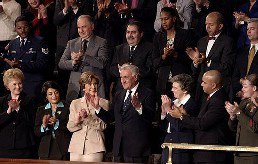 Chalabi with Laura Bush at the State of the Union address, 2004. Whitehouse photo.

For the Bush administration and its cronies, Chalabi's placement in the Oil Ministry is probably much more important than any role in the newly elected government.

For years, oil has been the unidentified elephant in the room for many administration and security experts who discuss Iraq policy. Debate about Iraqi links to terrorism and WMD gave way to discussions about counter-insurgency and civil war -- but these were arguably just distractions from the big enchilada.

Sure, Vice President Dick Cheney noted the strategic importance of Iraq's oil in his famous August 2002 VFW speech that kicked off the Iraq war "marketing campaign."

Oil fields and the Oil Ministry were secured in 2003 even as other public facilities -- including WMD facilities -- were looted. Defense Secretary Rumsfeld dismissed the other looting, declaring "stuff happens." He added, "Freedom's untidy, and free people are free to make mistakes and commit crimes and do bad things."

But the Oil Ministry and oil fields were overtaken by US forces in the initial fighting and heavily guarded throughout the looting period.

Plenty of additional evidence suggests that oil has always been on the administration's agenda. Cheney's old energy firm Halliburton received enormous (no bid) rebuilding contracts in Iraq. In August 2005, President Bush himself mentioned securing oil supplies from insurgents as a rationale for continued US troop presence in Iraq.

But Iraq's oil infrastructure needs to be modernized to meet America's (and the world's) growing demand for imported oil. Professor Michael Klare explained the main problem in March 2005:

The NEP [May 2001 National Energy Policy] also made it clear that the existing oil infrastructure in the Persian Gulf was inadequate to produce the much higher levels of oil that would be needed to satisfy projected U.S. and international requirements in the years ahead. According to the 2001 edition of the Department of Energy’s International Energy Outlook, the Gulf countries would have to nearly double their combined output, from approximately 24 million barrel per day (mbd) to 45 million barrels, in order to meet anticipated world demand in 2020—a Herculean task that exceeded the capacities of many of the region’s prevailing regimes, including those in Iran and Iraq. Only if U.S. firms were allowed to come in and take over production in these Gulf countries, the NEP hinted, would it be possible to quench the world’s insatiable thirst for oil.

What better person to assure this kind of production transformation than Chalabi, a pro-western Iraqi expat businessman with a history of alleged shady dealings and corruption?

Do the math, that's a forecast growth of nearly 17% this year.

No wonder the administration has all but abandoned Iraqi reconstruction aid.

Could it be that they've gotten what they wanted all along?